>Ugh. I had no idea how much more work it would be to get two kids to school than it was to get one. My kids go to a private school, though, and there is a much higher level of expectation for the parents to live up to. I mean, Mondays they have to wear their PE shirts, and PE shorts are optional. My son has chapel on Wednesdays and has a certain uniform for that, and my daughter has chapel alternating Tuesdays and Wednesdays, and has a certain uniform for that. On top of that there is the optional Mileage Club shirt, for the running club that my kids are in, which can be worn on Tuesdays, and the Chess Club shirt for my son, which he would normally wear on Mondays, because that’s when Chess Club meets, except that he’s required to wear his PE shirt on Mondays. So, if he really wants to wear his Chess Club shirt to Chess Club, I have to remember to pack it in his backpack.
And that’s just the uniforms!
I am really enjoying the quiet of the day that comes between bursts of morning and afternoon activity, though. Having the little guy over that I watch keeps me busy, but not really THAT busy. I remember when I had my first baby and I thought it was so difficult. I find it really funny now that just the one baby is such an easy thing to handle in light of my other duties!
So….now that I have served my homemade dinner, complete with chocolate cake, read a chapter from our current story to the kids and they are neatly tucked in, I must attend to the duties of preparation for tomorrow.
Let’s see….tomorrow is Tuesday….now, what uniform did I say I would have to iron????

>DAILY BLISS: This was a drizzly, rainy sort of a day – apparently due to some sort of frontal boundary moving slowly down over the state, the particulars of which I was never privy to. However, it is a rare thing that we get rain here in central Florida without the booming accompaniment of thunder and plenty of lightning. So, I spent this blissful afternoon reading a novel on my front porch while my children enjoyed the rare privilege of splashing around in the rain outside. Perfection! 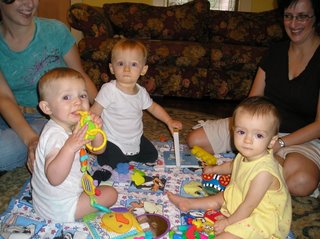 Today, I hosted a group of mommies at my house. Everyone I know has just had babies (except me – I’m quite done with that, thank you) and I decided I would like to be the one to give them a place to congregate and have a cookie or two! So, here are the three cuties that were present today. Copious amounts of drool and many brightly colored toys were shared. Raucous fun was had by all! Oh – and the babies had a good time too.
I’m just really excited to hang out with my friends. No agendas, no Bible studies, no purpose – just being together and getting out of the house. Well, they get out of their houses. But I’m okay with that.
DAILY BLISS:
Playing chess with my son! He finally cornered me and sat me down to school me on the ways of competitive chess. Yes…..my son is on the chess team. All in all, I didn’t do half bad!

>So….I had a pretty big birthday this year. A milestone. And my brothers and their wives bought me this awesome KitchenAid Artisan stand-up mixer. And it’s red (as I mentioned before, my favorite appliance color!). I used it this morning to make biscuits.
I am pretty famous around these parts for making biscuits. I have a nice little pastry cutter and I don my apron and cut that cold butter right into the flour with just a flick of the wrist. Well, there is sometimes a little sweat involved – it’s a big job. I decided I would give my mixer a shot at the famous biscuits. It worked beautifully! It just cut that butter right into the flour like….well….butter. And I just stood there.
Honestly, I felt a little obselete. My hands weren’t getting floury or buttery. There were no white splotches on my clothes. Nothing. Not that it wasn’t fabulous, and not that the biscuits didn’t turn out better than I imagined they could – it’s just that….well, I was hardly necessary in the process.
This creates quite a dilemma for a girl like me. I mean, I prefer hand-written thank-you notes and from-scratch cakes. But, the truth is, I didn’t sweat at all and the biscuits were quite delicious. I mean, I did still have to cut the dough into little circles and put the pan in the oven and set the timer and…..I’m not totally outmoded……yet!